Tom Ferguson made himself a promise: that when he turned 50 he’d say goodbye to a successful career in corporate America and find a way to become a farmer. Lucky he did. Tom’s now the proud owner of a thriving family-run apple business with 100,000 apple trees spanning three locations in Eau Claire, Chippewa Falls and Galesville, Wisconsin where apples have been grown on the same land since the 1870s.

Tom and his wife Deb got their start in the apple business when they moved their young family from sunny Southern California to their original Galesville orchard in 2001. They got to work learning everything about growing apples – and their early study paid off big time. In 2014 they became the largest single grower of Honeybear’s exciting new Pazazz variety when they planted 35 acres and 40,000 Pazazz trees.

Today Ferguson’s orchards are even more of a family business with their busy staff also consisting of their two sons, their wives and young children. Joe Ferguson, a former marine returned from service and moved to the farm, while his brother Andy, gave up his law practice to become a co-owner of the orchard in 2013. 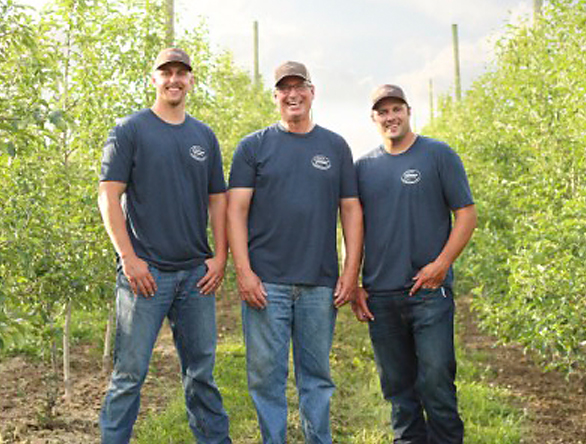